Even after 30 years of recording experience, some lessons need to be repeated over and over and over....
In this case, I am thinking of the necessity to plan each recording in a different way than I plan a recital.
In a recording project, you can start with whatever you want!
Normally I always start with a movement that makes sense in terms of adjusting to the recording environment. I consider the energy and possibilities as carefully as I do when planning a recital, but in the case of a recording, it is all about creating a setting that encourages the maximum vitality and inventiveness from myself and others within the constraints of time and circumstance, particularly in the first session. This often means choosing a movement that is relatively straightforward and fairly exuberant. For example, when Guy and I recorded the Hindemith Double Concerto, we started with the short and punchy last movement. It was still hard but also simple at the same time compared to the massive first and second movements.
In the case of the Braun Solos, with only my lone personage on stage, I merely started at the beginning and went to the end. It makes sense and it also doesn't make sense. And it retrospect it was not a passive decision, but one that emerged from the many times that I have played through the complete work for the pleasure of doing so (and for the aerobic benefits!).
I am now listening to the first edit of Solo #11 (Concerto - such an odd title for a solo work!) and it is so vital, brash, yet refined... the way I can sound when I am completely at home in my acoustic environment. I sound happy!
So this recording will be a real chronological snapshot of my own self as I took the first polite steps, walked a bit (albeit quite briskly), then broke into a joyful run. And maybe, after all, that is a natural progression given the nature of this opus... somehow discovery takes the place of absolute prior certainty.
God, I love this music.
Tidbit #2 - every recording project has a life utterly of its own. Amen.
Posted by Nadiva at 9:47 PM No comments:

The first edits of the 9 of the 24 Solos by Jean-Daniel Braun have come to my computer from David Bowles, my Berkley-based engineer and producer.
At the moment, I am making my first little splashing steps towards immersion in new music, improvised music, and electronic music, so listening to these small jewelled pieces is like waking out a dream and trying to find my glasses. Except that I NEVER wear my glasses. Anyway.
I am having a different experience from my normal reaction to hearing the first edits of my recordings and part of this has to do with listening on my computer... I have never done that before and there really are elements of the sound missing. However, with each repeated listening it all sounds better to me... David (my oh-so-calm engineer) says that the mp3 files, even the huge ones that he is presently sending, are missing data that we will hear on the final disc. Once the first stages of editing are complete, he will send the tracks on a CD and it will sound much more complex.
No matter how many times I do this, there is always a new dimension to the experience. One thing is for sure... the recording process and listening to the playbacks has informed my playing enormously and I feel (though I don't know if it is true) that I could play these pieces much better now.
As I continue to teach the Solos to my students every week (these are fantastic studies for gaining fluency in voicing and articulation), I tell them that my only regret from the recordings was the realization that I was so entranced with the melodies that I did not develop my own variations and ideas to the point of absolute familiarity. All of my students are playing these works, from the relative beginners to the grad students. I tell them to first be wildly, extravagantly and possibly tastelessly inventive in the repeats of the Rondeaux and Minuetti... find the passages that seem true, find others that have humour, discover the notion of invention within other less obvious techniques, such as note lengths (including inégale), colouring of sound, timings ... play it until some of the passagework and phrase shapings become part of your expectations and language, then take the music to a baroque superstar performer (i.e. a flautist, gambist, cellist, maybe a bassoonist) and get their ideas.
These are 24 tiny baroque sound sculptures, all under 3 minutes long. They have a reality and flexibility that make them endlessly fascinating despite the limited key range (13 in G minor, 6 in D minor, 3 in C Major, 1 in C minor and 1 in B flat Major).
Posted by Nadiva at 11:25 PM No comments: 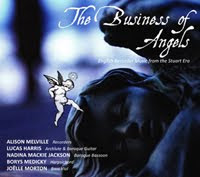 I am playing on a few tracks of Alison Melville's spectacular recording, Business of Angels and I am ridiculously pleased with the results.
I have played on many baroque orchestral recordings and have even done one classical chamber music disc on A=430 bassoon (Aux Armes Citoyens!), but this is my first A=415 somewhat-solo-here-and-there (i.e. chamber music) recording.
Alison is a superb performer, deft, soaring, tender, surprising and all of this on an instrument that I have never associated with passion and daring, the recorder! The other continuo players were really impressive, inventive and downright attractive (Borys Medicky, Lucas Harris and Joelle Morton).
Though I have admired her playing for many years, this recording somehow made me sit up and pay attention... maybe just because I was playing on it (oh shallow soul that I am). And it has made me resolve to take recorder lessons from Alison. First we have to buy an instrument, but that is always fun.
Recording always leads to greater interest, greater excitement, greater happiness. At least, this has been my experience when participating in solo and chamber projects.
Posted by Nadiva at 9:40 AM No comments:

OK, my timeline is a bit off.
I had planned to release the Braun Solos in time for Christmas. Ha!!!
The good news is that I am starting to receive the first edits and it is an interesting
contrast between the electro-kinda-rock-n-roll stuff that I am playing this week and
the 270 year old solos for completely self-sufficient bassoon. I have said it before and I will say it again.... the recordings are based in dreams and ideas and straightforward planning.
Life sometimes gets in the way of all of the above.
Posted by Nadiva at 9:36 AM No comments:

The Hero's Journey: Cave of Echoes

Here is a review and description of a concert that we did on Saturday night (Jan 8), the brainchild of mad genius Earl McCluskie and my first fully electronic show. A truly incredible experience to perform with fantastic jazz/classical musicians and improvisors including electric violinist Hugh March, guitarists Michael Occhipinti and Kevin Ramessar along with singer Jennifer Enns-Modolo, violist Doug Perry and Guy Few on trumpets. The dancers (Miranda Abbott and Lybydo) were amazing and though we never got to see the video projections, apparently they were amazing too.
And what is not described in the review is the process of mixing electronics, pre-recorded sound and live (both acoustic and amplified/altered). To be honest, I don't really know what was going on behind the giant soundboards, but to me, this was a new use of recorded sound that brought unexpected dimensions to the live performance.
This show, along with Phenomenological Love Songs that we did last year, was a truly successful new music-improv - pop - jazz - rock - multi-media - sensory overload fusion event of the kind that I really really love. I am still a novice but it is an exhilarating experience. And yes, sequins were definitely part of the process!

Hero’s Journey almost too much of a good thing

The rotunda at Kitchener City Hall morphed into a performance cave Saturday evening, complete with dancers, a giant video screen, and a collection of seven musicians representing some of Canada’s brightest lights in the classical, jazz and experimental genres.

The overarching theme for this extraordinary performance entitled The Hero’s Journey: Cave of Echoes, presented by Chestnut Hall Camerata (artistic director Earl McCluskie), drew inspiration from Joseph Campbell’s book The Hero with a Thousand Faces (1949), providing a loose frame for the four works, performed uninterrupted in an 80-minute program.

On-screen was a series of slow-pan landscapes — trees, fog, clouds, waterfall — setting the context for the hero’s origins. These softly muted images had an elemental feel suggesting an Eden-like natural purity. Through all of this, two black-clad dancers (Miranda Abbott and Libydo) from Event Horizons Dance, gradually came to life, starting from an inert position on the floor, their movement reflecting the musical evolution and feel.

This initial work entitled How the Violin was Born culminated in an extended cadenza, featuring Marsh’s virtuosic electric violin, complete with round and sinuous melodic fluttering, exotic scales and crossing-over harmonies.

The second work, exploring the nature of the hero, was adapted from Act III of The Cave by the iconic, contemporary composer Steve Reich.

Spoken and sung text fragments, pivoted off from the biblical story of Abraham and Isaac, exploring the persistent tensions present in these broad-ranging religious myths. Visual and audio displays included images and sounds of ordinary people emphasizing the universality of the themes.

Through the production vehicle, The Chestnut Hall Camerata, artistic director Earl McCluskie has developed a reputation for dropping the artistic boundaries, presenting unique and interesting, thematically driven performances that captivate and enlighten.

The third piece on the program, featured music director Michael Occipinti’s composition The Great Farini. This wonderfully floating andante in 5/4 time, had a much more relaxed and sumptuous feel, with sunny, Italian-inspired melodies rendered by the violin, trumpet and bassoon. Visuals included scenic landscapes, a park boulevard, and images from an art gallery.

While the Reich had an intensely note-bound, concentration quality to it (in addition to somewhat overstaying its welcome), this piece seemed much more organic, natural and germane to the group — certainly, my favourite on the program.

The final piece upped the groove again with an arrangement of Forty Six and Two by the rock band Tool. A sense of driving rhythm, exotic melodies, and commanding vocals finished the concert with a punch.

In all, the evening was huge success, the combined efforts of nine masterful performers, and countless others in both artistic and technical support. If anything, it bordered on being too much of a good thing, the persistent stream of visual and aural stimuli proved dizzying at times. Nevertheless, the overall performance creativity and bravado of this organization is something not to be missed.

This article is for personal use only courtesy of TheRecord.com - a division of Metroland Media Group Ltd.

Posted by Nadiva at 6:47 PM No comments: